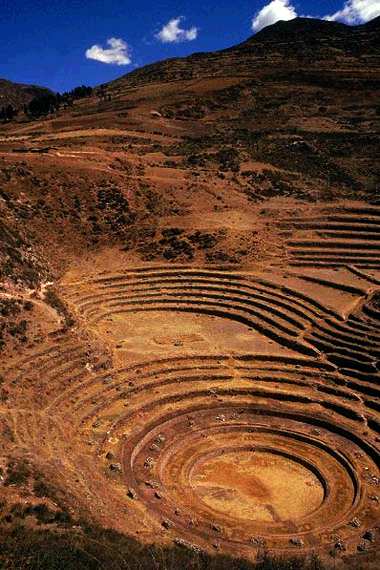 It is located in the jurisdiction of the peasant community of Mullakas Misminay, northeast of the Maras district, Urubamba province, Cusco department.

Access to the archaeological zone is carried out by two routes: the first the Cusco – Urubamba highway, which joins Maras – Moray at a distance of 9 kilometers (detour to the town of Maras) and the other from the town of Cruzpata by means of a carriage trail. 1 kilometers.

The word “Moray” had something to do with the corn harvest called “Aymoray” or the month of May whose name was the same, and also with the dehydrated potato that is the moraya.

Moray is a system of platforms with concentric rings. Each circle comprises a terrace that overlaps another, forming circles that expand. They can be accessed from one to the other by climbing ledges (sarunas), embedded in the wall.

For scholars, this place was possibly an agricultural research center in the Inkaika era, where cultivation experiments were carried out at different heights. The arrangement of its platforms produces a gradient of mycoclimates, with the center of the concentric circles having a higher temperature, thus reducing the simulation of up to 20 different types of microclimates. Contemporary studies found variations in average temperatures of up to 5 ° C.

Due to their sheltered position, each of these platforms represents approximately one thousand meters of altitude under normal farming conditions. In its entirety, the complex would contain twenty or more scale ecological zones.

It is believed that the place could have served as a model for calculating agricultural production not only in the Urubamba Valley, but also in different parts of Tawantinsuyo.

Various theories explain the use of Moray in pre-Hispanic times. According to the historian Edward Ranney, the Incas used the terraces as a place for special agriculture, perhaps for the cultivation of the coca leaf. John Earls claims to have discovered vertical stones on the terraces, the same ones that would mark the limits of the evening shadows during the equinoxes and solstices. Local people call these stones “Ñustas”. This researcher concludes that each terrace reproduces the climatic conditions of different ecological zones of the Inkaiko and indicates that they produced 60% of vegetable species in these terraces, three thousand varieties of potatoes, corn and many others.

In short, it was an important center for domestication, acclimatization and hybridization of wild species, which were adapted for human consumption.

This archaeological site still awaits researchers to carry out comprehensive work in order to reliably establish data on the species of flora that have been domesticated and cultivated here and explain how the water that flows through the aqueducts is filtered. It is assumed that there must be underground, natural or built causes that allow the liquid element to drain. Another possibility is that this agricultural infrastructure could be on top of a very porous stone formation that would facilitate the filtration of water into the interior of the earth.

Until today, the back terrace has never been flooded, even in the rainy season, when the rainfall is intense and prolonged.